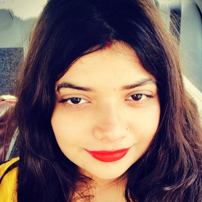 Startup journey from rags to riches The harder you work, the luckier you get. Never be afraid of taking risks, because not taking one is an even bigger risk.

We all hate failure, and the very last thing that we want to do in life is to fail. What we don’t realise is that failure is nothing but a step closer to success. Call it destiny, or karma, or fate; everything happens for a reason and nothing is impossible.

First things first, I faced a major dilemma while choosing my career, and with the advice of my friends, I decided to pursue CA. In a couple of months, reaching the CA final, it struck me that this was not for me, it wasn’t my cup of tea and I couldn’t see myself doing it for the rest of my life. I ended up dropping CA. Everyone around me, relatives, friends, said that my career was ruined.
In short, they never believed in me. But one person did. I believed in myself.

I am a dreamer and had big dreams for my future.

I was certain that my decision was to do-or-die, and I was determined to build my life. I promised myself that I wouldn’t look back or go back, no matter what. I decided to live life the way I wanted to, by designing my own destiny.

Soon after the drop out, I got the opportunity to partner a big new year’s concert in 2014, which involved celebrities, tickets, sponsors. Things weren’t going according to plan, sufficient tickets weren’t sold, there weren’t enough sponsors and we had the immediate liability of 40 lakh rupees. The day of the event, my partners ran away and at that moment, I had two choices. One, to stay and face the music, as they say, or second, to run away.

I chose to face the situation head on, instead of fleeing from my problems. I called my father, and explained everything to him. Immediately, he sold the house, and gave me the money, which helped me execute the event properly. After the loss, I locked myself in a room for a couple of days, broken and shattered. My father talked to me then, told me to pick myself up, and to consider this huge loss as a learning opportunity. Told me to think of it like an MBA degree.

That got me started on a path of self-realisation. Why am I behaving like this? Why did I start this journey? Is this who I’m supposed to be? IF not, then why am I not doing anything to work towards my dreams?

Soon, I gained the passion, power and energy to rebuild my life. I have learned that commitment and trust are the most important ingredients in the recipe for success.

Consequently, I got married to Vikas, and we cofounded Gohoardings in April 2016. My vision was to make a space for myself in this male dominated industry and to genuinely solve the problems that it faces.

In the beginning, we did face a lot of problems. Initially, it was only Vikas and I, taking care of operations, design, accounts, development and all the other work. We were from different fields and initially had no experience of outdoor branding as Vikas was an engineer and I was from finance, but we both have merged our experiences to build a tech platform by connecting traditional outdoor advertising with technology to resolve the customers problems and to distrupt the OOH industry. For the first 4 months of the company being formed, we had no sales and we were using our savings to take care of the operations. I got my first deal in August 2016 and I’ve never looked back since.

Being a woman, life throws interesting curveballs at you. After a year of Gohoardings, I found out that I was going to have a baby. It was again a dilemma, one of finding the right balance between my professional and personal life. I knew that I needed to give the due time and energy to the company as well, because it was nothing short of a new born baby to me.

So, I managed both things. I attended office throughout my pregnancy, and even though I got tired and frustrated at times, I had my goal in mind. I was on track, and during the delivery, I requested the hospital to do a normal delivery so that I could return to work as soon as possible. With the support of my family, I was successful in doing just that.

I’ve never considered my life to be a struggle, because I love what I do and that has helped me fulfill my dreams. Now, we’re serving in 130 cities of India, in less than 2 years of operation, and we’re on track to achieve 50 crores in revenue this year. Many online channels and portals liked our startup idea and they call us the Oyo Rooms of Outdoor Advertisement. It is the best feeling, knowing that people like your startup and your idea and getting appreciation for the same.

As I conclude, I would like to keep it simple. Be yourself, no matter what, and be fearless in the pursuit of your dreams. And remember to enjoy the journey, it’s just as beautiful as the destination.