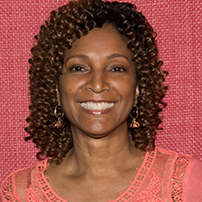 Executive Director of the Association of Certified Professional Wedding Consultants. The ACPWC, founded in 1990, provides training and certification courses for wedding and event planners. Deborah completed the ACPWC course and became a Certified Wedding Consultant. She served as the chairperson before taking over as director in 2009. Deborah is an international speaker and has represented the ACPWC at conferences in Las Vegas Las Vegas, Maui and Cancun, as well as Limerick, Ireland and at the first International Bridal Expo in Beijing China.
Deborah has been quoted in Black Enterprise, Merrill Lynch Wealth Management Perspective Newsletter and the San Francisco Chronicle. She had written articles for numerous wedding publications and featured in Women of Wealth magazine. She has been a guest on the KDOW radio – Business on the Edge segment and the Associated Press Television Network. She has been acknowledged in the Cambridge Who’s Who for leadership and achievement in her profession. Deborah was contributing author to Legacies, by Constance Gipson and Hazel Mahone. She released her first book called Persevere Through the Fear, a collaboration of stories by six professional women, sharing their journeys. Deborah studied Business at San Jose State University. She is married and lives in San Jose, CA where she attends Maranatha Christian Center. She is also a member of Eta Phi Beta Sorority, Inc. and Company of Women book club, established in 1994.