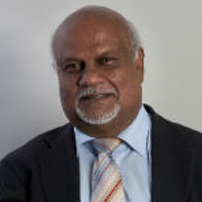 Mr. Dawlatram Ramlal is the city of The Hague’s special advisor for economic cooperation between The Hague and India. He has much knowledge and experiences both from small and medium sized companies in the Netherlands as from The Indian society. He also has a large network of Indian people and companies who are already based in the Netherlands.
Formerly, Mr Ramlal was alderman for Health and Welfare and Member of Parliament. He was also one of the founders of a fund supporting Surinam companies and entrepreneurship in The Hague.