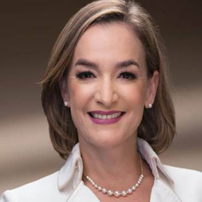 International Consultant and Expert in Finance

She is a lecturer, national and international consultant and expert in finance, stock market and sustainability. He received his Bachelor’s degree from Vassar College in the State of New York and an MBA from the University of Michigan. He has completed postgraduate studies at Harvard and Yale Universities in the United States, at the University of Oxford in England and the Central American Institute of Business Administration (INCAE) in Costa Rica.
With only 27 years old, she was appointed as Vice President in the Emerging Markets division of the Deltec Asset Management company where she was in charge of the political and economic analysis of the Latin American market. From 2002 to 2007 she served as Vice President the Fixed Income and Commodities division of the Goldman Sachs Investment Bank. In 2007, after having worked for 15 years on Wall Street, he returned to the Dominican Republic, to serve as General Manager / CEO of the Stock Exchange of the Dominican Republic, being the first woman in Latin America to occupy this position. From 2012 to 2017 she held the position of Vice President of Corporate Sustainability of the asset manager INICIA.
In 2008 she was selected Young Global Leader by the World Economic Forum, being the only Dominican woman with this award. It was recognized as “ The Best CEO of the Dominican Republic 2011 ” by the European CEO magazine. From 2008 to 2011, she was Secretary of BOLCEN, a consortium of seven Stock Exchanges representing Central America and the Caribbean. He is currently a member of several boards of directors in the Dominican Republic, the United States and Brazil. He has been a member of the board of the Institutional and Justice Foundation (Finjus), National Social Security Council (CNSS), French Dominican Chamber of Commerce, among others.
She is currently a national and international consultant and speaker on issues of sustainability, stock markets, finance, among other topics. She is the mother of three children and is a marathoner.