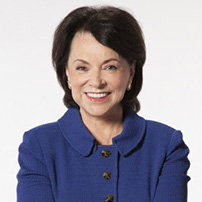 Daryl Harrison Rand is the President of HarrisonRand Advertising, Inc., a Women’s Business Enterprise Corporation, fully certified by the State of New Jersey, the Port Authority of New York and New Jersey, and the State of New York. In 2009, her sons Jason and David Rand joined her in the family agency founded by her father, Harold Harrison, in 1941. Since then, the agency has won an impressive roster of awards on behalf of a wide variety of clients in the NJ/ NY region.
Her work on behalf of the International Advertising Association (IAA) dates back to 1994. Since then, she has served four World Presidents, been a member of the World Board, held the position of Vice President/Internships, and subsequently Professional Development, and assumed the Presidency of the New York Chapter, one of the organization’s largest and most active.
Rand’s career has incorporated four decades of active volunteerism by serving as a board member of business trade associations, health care facilities, cultural arts organizations and educational institutions. Since 2005, she has led six delegations of North American Business Women to India to forge dialogue and linkages with members of the Indian business communities in Mumbai and Delhi. She also serves as a member of the Advisory Board of Children’s Hope India, Inc., from which she received the prestigious Lotus Award in 2011 for her leadership and philanthropy.
In 2008, NJBiz named Rand as one of New Jersey’s Best 50 Women in Business. Later that year, the NJ Ad Club inducted her into its Hall of Fame. She serves the organization as a member of the Board of Directors. She is also Chairman of the Hudson County Chamber of Commerce which honored her in 2009 as a LEGEND