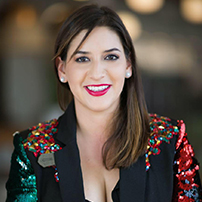 Dany González is a mexican entrepreneur, tenacious, dreamer and hustler for goals and dreams. She is party master and founder of CODE PARTY, the funniest way to learn for the future.

In CODE PARTY they create programs and learning environments for little girls and boys (6 years until 12 years old) to understand and use the technology in the funniest way. Her secret: Parties where playing is part of the learning and amusement.

In CODE PARTY they integrate their own STEAM methodology(science, technology, engineering, arts and mathematics) where kids in a didactic way learning how to be creators of technology instead of consumers, contributing to close the child STEAM gap in the places where it has impact.

● She was chosen as one of the four ambassadors of Mexico at the 2017 GES ( Global Entrepreneurship Summit in INDIA)
● She was chosen as one of the 33 protagonists of Mexican Innovation by BBVA BANCOMER.
● She was Samsung’s ambassador for LATIN AMERICA and spokeswoman for brands such as COCA-COLA Mexico by their programm 5BY20 empowering 5 million women by 2020
● Winner of Tec Woman Award for Tecnológico de Monterrey in 2015 in the entrepreneurship category
● 3 times Speaker at TEDX

Prior to undertaking in the area of women and technology, she specialized and worked in marketing, communications and digital creation at the Tecnológico de Monterrey, a position that led her to start the Department of Digital Communication in the hole country of Mexico. She also has been the Digital Strategist for Eugenio Garza Laguera ( Entrepreneurship Institute) and fot INCmty, the largest entrepreneurship festival un Latin America.

Similarly, there are his first two ventures, BLA BLAH, a digital communication agency for startups and Helio, a mass event event company where she created VLOGGER FEST from scratch, the first and only event of its kind that brought together the top mexicans video bloggers of youtube, creating a community of more than 20,000 people on Facebook in less than two months organically.

Daniela studied the Communication degree with a specialty in public relations and advertising at the Tecnológico de Monterrey, Campus Monterrey. She was born in Saltillo, Coahuila on April 27, 1989.