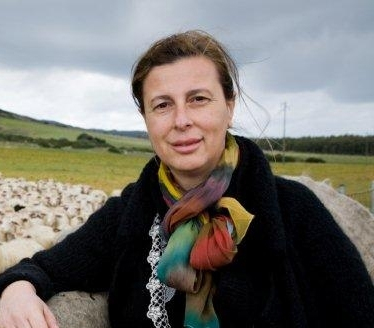 Daniela Ducato (Cagliari – Sorradile -Sardinia Italy 1960)
EDIZERO architecture of Peace HOUSE GREEN CO2.0 is a producer of peace. She works in team for the design and the production of new biomaterials inspired by plants and animals, at high industrial technology. Products are only made with renewable excess of ingredients, zero oil , derived from residues of byproducts of food . Vegetable scraps considered wastes.
Edizero products don’t contain war, oil, they are fossil zero, zero land grabbing, grabbing ocean zero, zero exploitation of people and landscapes. They are the most award-winning renewable products in the world in acoustic fields, construction, energy efficiency, geotechnical, environmental clean air, water, sea, soil.

Among the world record obtained by products of EDIZERO Architecture of Peace chains:
Edilana has the best insulating power among all thermotextiles in the world.
Edimare has the best specific heat capacity of all the thermal insulation in the world.
Edilatte are the first paintings , paints, coatings in the world 100 % free water, created from more than 100 ingredients sourced from the waste of wine , olive oil, honey , beer, legumes, cereals, vegetables.
Geolana Geowool save soil, the first geotextile in the world which depollutes the soil, provides wealth to degraded land. It restores fertility to the land.
Geolana Geowool sea cleanup the first in the world (no additives added ) with double power to absorb and metabolize petrochemicals and nitrogen pollutants hydrocarbons. Leaving clean seas, rivers, lakes.

Edizero architecture of Pecae has over 150 national and international awards, among them:
Daniela Ducato in 2015 was chosen to represent Italy in 21 case history of excellence of Made in Italy,
in the six months of Expo Milano show achieved the power of knowing how at Palazzo Italy.
Also in 2015 she was honored by the president of the Italian republic, Sergio Mattarella, with the title of Knight of the Italian Republic for environmental merits. https://vimeo.com/124285206

ROME AWARD ‘THE SUSTAINABLE CITIES OF GIRLS AND CHILDREN’ for the realization of the project in the city of Guspini called ” Invisible Cities “.
Environment Ministry of the Interior of the Action Plan and Government in support of Childhood and Adolescence.
NEW YORK -2004 ‘NEW URBANISM AWARD’ for the realization of the project “The Sound and the Dreams of Little Town ”
MILANO 2011 PRIZE ITWIIN ITALY best Italian innovator of 2011
RIO DE JANEIRO 2012 ‘WORLD CONFERENCE OF ENVIRONMENTAL SUSTAINABILITY’ Edizero Architecture of peace products chosen to represent the SOSTENBILITY EUROPE IN BUILDING
SEOUL KOREA June 2013 for the ethics sustainability and the materials of architecture and design Made in Italy

The materials library EDIZERO – Architecture of Peace , carbon free design , is the first library in
the world of technological materials gained from more than 500 ingredients in total traceability
and completely free of petrochemical derivatives, for an ” Architecture of Peace ” guardian of biodiversity ,
for man and woman sizes. PRODUCTS without oil. (Oil is one of the biggest cause in the world of war and
pollution of food chains and destruction of the planet).