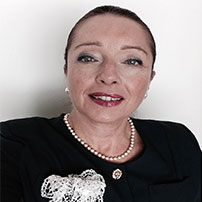 Ms. Daniela Bas, of Italian nationality, is the Director of the Division for Social Policy and Development at the United Nations Department of Economic and Social Affairs since May 2011.
Political scientist with a major in International Politics, she graduated Magna Cum Laude with a dissertation on “The elimination of architectural barriers and the employment of people with physical disabilities”. She is also a certified journalist and multicultural / life coach. Ms. Bas interest has always been people-centred in the various activities, associations, and professional roles she has held.
In addition to her work at the United Nations form 1986 to 1995, she held managerial roles from 1996 until 2011 in the private sector in Italy and was, inter alia, adviser for the Italian Ministry of Foreign Affairs and for the Presidency of the Council of Ministers on human rights and social affairs. Designated by the Ministry of Foreign Affairs of Italy, she was a member of the Board of Directors of the European Union Agency of Fundamental Rights; Special Adviser to the Vice President of the European Commission (On. Frattini); at the European Union, she was representative on the topic “Tourism for All” on behalf of the Presidency of the Council of Ministers of her country.
Ms. Bas worked in radio and TV shows (RAI and Radio 24/ Il Sole 24 Ore in Italy, and TV Channel 4 in the UK), moderated conferences and wrote articles for magazines on tourism for all.