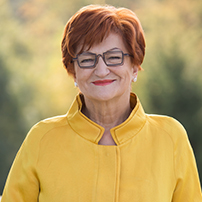 Prof. Purg is professor of leadership and effective management at IEDC-Bled School of Management. Her special field of interest is looking for inspirations for managers from art and other professions. She authored and co-authored several books and numerous articles on leadership issues. In 2004, she edited and jointly wrote the book Leaders and Teams – The Winning Partnership with professors Lynn Isabella, Pierre Casse, Paul Claudel and Arnold Walravens. In 2013 Prof. Purg co-edited Hidden Champions in CEE and Turkey; Carving Out a Global Niche (Springer). In 2015, a special chapter about her leadership journey was published in the book Women and Leadership Around the World by Information Age Publishing, USA, authored by Susan Madsen. In 2017 “Why Art in Management Education? Questioning Meaning”, an article that she co-authored with Dr. Ian Sutherland, was published in the April issue of Academy of Management Review. In 2018, Springer published the book Business and Society: Making Management Education Relevant for the 21st Century, which was co-edited by Prof. Purg. She contributed with Prof. Arnold Walravens a chapter “Artificial Intelligence and Executive Development”, which was published in 2019 in the book “Management and Business Education in the Time of Artificial Intelligence (AI) – The Need to Rethink, Retrain, and Redesign”.

Prof. Purg has received numerous national and international awards for her outstanding achievements in the field of international business education. The President of the Republic of Slovenia awarded her with the Honorary Order of Freedom for her contribution to management development in Slovenia and Central and Eastern Europe. Prof. Purg was chosen as a business leader role model of young professionals by the American Chamber of Commerce. She received the 2010 International Educator of the Year Award by the Academy of International Business (AIB) for her outstanding achievements in international business education. In January 2015, the Managers’ Association of Slovenia conferred upon her the Lifetime Achievement Award in the field of management. In 2016 she received a Certificate of the Lifetime Achievement in the field of CSR, Sustainability, Ethics and Governance for her “visionary work in the field of responsible management education in its home institution and around the world”. In June 2017, she received the Robert L. Dilworth Award for Outstanding Achievement in the field of Executive Learning and in July 2017, the Global UN PRME Forum awarded Prof. Purg for her pioneering work in establishing the UN PRME initiative. In December 2018, she received the highest French order of merit “National Order of the Legion of Honour” for her dedication and support in strengthening bilateral relations among France and Slovenia, especially in the field of management education.

Prof. Purg is a fellow of the International Academy of Management (IAM), Doctor Honoris Causa at several universities around the world, and holds two honorary professorship titles. She is a member of several international advisory boards at management schools around the world, including University of Stellenbosch Business School (South Africa), School of Management Zhejiang University (Hangzhou, China), and ESSCA School of Management (France). For 11 years, Prof. Purg was President of UN Global Compact Slovenia. In 2013, Prof. Danica Purg was nominated Chair of the PRME (Principles of Responsible Management Education) Steering Committee, an initiative started by UN Global Compact. In December 2019, Prof. Purg became Interim Acting Chair of the PRME Steering Committee.

She is a frequent guest speaker at European and American universities and international conferences.