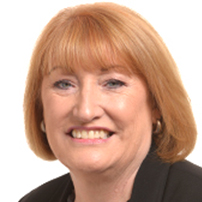 Member of the European Parliament from United Kingdom

Willmott was born in the mining village of Horden, County Durham, but moved to Mansfield with her family at the age of 10. She was educated in Mansfield and at Trent Polytechnic where she obtained an HNC in medical science. She worked as a medical scientist for the National Health Service at King’s Mill and Mansfield Hospitals from 1969 to 1990.
She was chair of Mansfield Constituency Labour Party and a member of Nottinghamshire County Council for the Leeming and Forest Town division from 1989 to 1993. She also worked as an assistant to Alan Meale (Member of Parliament for Mansfield) from 1987 to 1990.
In 1990 she became political officer for the GMB trade union Midland and East Coast region. She served as chair of the East Midlands Regional Labour Party and was second on the Labour Party list of candidates for the European Parliament in the 2004 elections to the European Parliament in East Midlands.

On 1 January 2006 she replaced the late Phillip Whitehead as a member of the European Parliament for East Midlands following the latter’s death. The Labour party is part of the Progressive Alliance of Socialists and Democrats (PASD) European group.
In July 2006 she was elected to the position of Chief Whip of the Labour MEPs in the European Parliament, a position she held until January 2009, when she was elected as the Leader of the Labour MEPs, replacing Gary Titley who had resigned the post. She is now the longest serving leader of the EPLP, surpassing Barbara Castle and Gary Titley.
Committee and Delegations Membership
As of 2014, Willmott sits (or is a substitute) on the following Committees and Delegations:
• Member Committee on the Environment, Public Health and Food Safety.
• Member Delegation for relations with Canada.
• Substitute Committee on Employment and Social Affairs.
• Substitute Delegation for relations with Switzerland, Norway and Iceland.
In September 2014, she was appointed rapporteur for changes to medical devices legislation primarily triggered by scandals involving PIP breast implants and ‘metal-on-metal’ hip replacements.
She also hosted an PASD event at the Espace Léopold focussed on improved labelling of alcoholic drinks.
In October 2014, Willmott received the Outstanding Leadership Award from the Belgian Association of Clinical Research Professionals for her work on clinical trials legislation.
2014 Election Campaign
In May 2014, Willmott launched her East Midlands campaign in Derby “promising to help people struggling with the cost of living”. She said the Conservatives wanted to help energy companies and bankers. “Nearly 340,000 East Midland jobs depended on continued membership but the Tories hadn’t said what aspects of EU membership they wanted to renegotiate or when they would do it. An EU referendum would just be a distraction when Britain was trying to improve its economy”. She also claimed UKIP’s stated objective of “cutting red tape” were really about “cutting people’s rights at work”.
In the East Midlands where five seats were contested, Labour retained Willmott’s seat and increased their share of the vote by 8%.

DAMEHOOD
Willmott was appointed a Dame Commander of the Order of the British Empire (DBE) in the 2015 Dissolution Honours Lists on 27 August 2015.