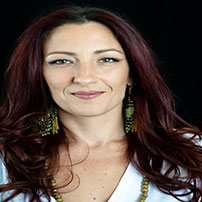 Dálida was born on the 22nd of December 1977 in Faro, Portugal where she lived up to the age of 20 with her parents and sister. She never wanted to go ahead with her studies and after secondary school she had a bad motorbike accident which damaged her leg severely. She has always shown great resilience and has developed a huge capacity to overcome all of her challenges. She has worked since she was 15 and her Independence has been her motto. At the age of 23 she fell pregnant and went back to her parents’ house because she was uncapable of sustaining herself. After her son’s birth she started working at the airport and still works there. In 2012, after two particularly difficult relationships, she started seriously working on her self-discovery and coaching came her way. She is now also a Coach and Therapist in the Algarve, Portugal.