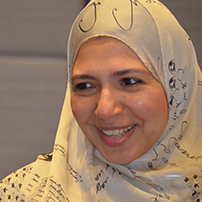 Chief Executive Officer at Nahdet Misr Publishing House and Founder of EdVentures, Dalia Ibrahim has more than 25 years of professional experience in education, publishing, digital solutions, and entrepreneurship. Graduated with honors in Business Administration (1993) from the American University in Cairo, she solidified her educational experience with a Masters of Public Administration (1999) and an Executive MBA (2014) both from the American University in Cairo.

She started her career in 1994 as a Publishing Executive at Nahdet Misr Publishing House. It wasn’t long before she realized the importance of introducing new integrated services and solutions that further support education and learning in Egypt and the Arab world. In 1998, she established Nahdet Misr for Digital Solutions, which offers various digital educational solutions and applications. In the same year, she established Nahdet Misr Advertising, which specializes in animation, virtual reality and augmented reality production. Dalia Ibrahim has also succeeded in establishing Nahdet Misr Periodicals in 2004, which publishes the Arabic versions of the world’s most acclaimed entertainment magazines such as; Disney and National Geographic across Egypt and the Middle East. In 2009, she contributed in establishing Nahdet Misr Trading and Distribution; which supplies and distributes all kinds of stationery, and educational supplies.
Driven by a sense of commitment to the society, Dalia volunteers to serve as a mentor or a judge to start-up projects of young entrepreneurs, which triggered her to later initiate the establishment of EdVentures in 2017. EdVentures is considered MENA’s first corporate venture capital specializing in education, culture and innovative learning solutions.