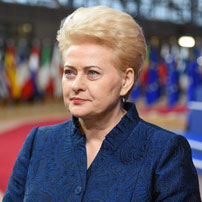 President of the Republic of Lithuania

Dalia Grybauskaite, (born March 1, 1956, Vilnyus, U.S.S.R. [now Vilnius, Lithuania]), Lithuanian politician who served as president of Lithuania (2009– ); she was the first woman to hold the post.Grybauskaite studied at Leningrad A.A. Zhdanov State University (now Saint Petersburg State University) and earned (1988) a doctorate in economics from the Moscow Academy of Public Sciences. From 1983 to 1990 she was a lecturer at the Communist Party’s training college in Vilnius, and after Lithuania gained full independence in 1991, she held posts in the country’s Ministry of International Economic Relations and Ministry of Foreign Affairs. After serving (1996–99) as the plenipotentiary minister at the Lithuanian embassy in the United States, she returned to Vilnius to assume the office of deputy finance minister and became Lithuania’s chief negotiator with the IMFand the World Bank.