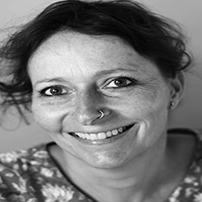 Cristelle co-founded the Dil Se Association with Marina Racine in Switzerland in 2000. She has been the Managing Director of Dil Se India since 2009. Cristelle is an Anglo-Swiss national who moved to Kochi in 2000. Since then, as a social worker, she has set up and run several children’s homes, helped families in need with food and education and worked with people living with HIV/AIDS. Throughout those years, she encountered many sexually abused children. When a 14-year-old who had previously been cared for by Dil Se became pregnant, Cristelle set up Tejus Home, a home for abused pregnant teenagers, along with Birthvillage (natural birthing centre). Between 2013 and 2015, Cristelle attended several workshops and training sessions on the prevention of child sexual abuse. Seeing Kerala’s desperate need for greater awareness and healing, she initiated the setting up of the Child Advocacy Centre. Cristelle is also a certified Arts-Based Therapy practitioner and has her own studio in Kochi: Bianhua. Cristelle lives with her husband and two young sons who study in a child-led learning centre. Her interests include nature and reading.