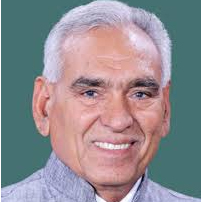 Chhotu Ram Chaudhary is a member of the Bharatiya Janata Party and has won the Indian general elections, 2014 from the Nagaur (Lok Sabha constituency).he was given the responsibility of minister of state of Department of consumer affairs, Food and Public Distribution. In latest cabinet expansion in September 2017, he has been given additional responsibility of minister of state for ministry of Commence and Industry.