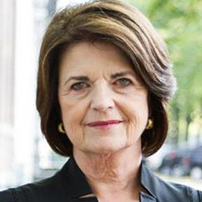 Corinne Dettmeijer was appointed as Dutch National Rapporteur on Trafficking in Human Beings on October 1st, 2006. In 2009 her mandate as rapporteur was extended to include child pornography, which was replaced and broadened in 2012 to include the whole area of sexual violence against children.
Corinne Dettmeijer has for many years been a judge at the district court of The Hague, from 1995 until 2014 she served as vice president of the court. As a judge, she handled cases in juvenile, criminal, family and migration law. She has been a member of several (international) professional bodies and advisory committees in the field of juvenile law. After finishing her law degree at Leiden University, she started her career as a public prosecutor in Rotterdam.
The Dutch magazine Opzij elected Ms Dettmeijer in 2015 as one of the most powerful women in the Netherlands working on justice and public policy.
Her recommendations have led to a doubling of the capacity for the investigation of child pornography and a greater realization that the approach to it must not be confined to investigation and prosecution (Ministry of Security and Justice), but must also extend to prevention and identifying and providing assistance for victims (Ministry of Health, Welfare and Sport). A further development is that there are now also judges specializing in human trafficking cases. On the recommendation of the National Rapporteur, a campaign has also been launched against child sexual abuse. Corinne Dettmeijer regularly speaks at conferences and visits dignitaries in the Netherlands and abroad.