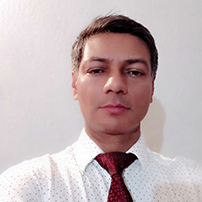 Officer commissioned into the army in 1987 in the elite armoured Corps. Served till 2009 taking VRS to look after his father, late Lt General Ranbir Singh.
He was awarded the chief of army staff commendation medal in 2003.

In 2004 started training in krav maga , Israeli self defense system, becoming an instructor in 2004, in the first krav maga instructor course held in the country.
While in Service, gave demonstrations to senior officers, disarming and dealing with multiple attackers.

Has been actively involved in training woman in self defense, in workshops and seminars with sole aim of empowering woman. The presentations are in the form of lecture and training, with the important aspects of awareness, security conciousness and few important techniques to deal with violent situations.
The journey in this field had been tough, with few takers to spare time to learn, however with perseverance ,patience, determination and love of teaching, Lt Colonel jaideep Singh keeps persisting with the aim of empowering women .