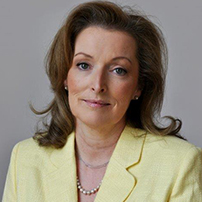 Following a successful business career in the USA, Mrs Scheckter returned to the UK in 1996 where she was instrumental in setting up Laverstoke Park Farm, a 2,500 acre organic and biodynamic estate in Hampshire, England.
Her passion for education saw the founding of the Laverstoke Park Education Centre in 2002, which to date has welcomed over 15,000 young people for free farm educational visits and was officially opened by HRH The Princess Royal.
Mrs Scheckter has been a school governor since 2006. In 2011 she was awarded an Honorary Fellowship of the University of Winchester for services to education and has served on the MOD Independent Advisory Panel in Hampshire since 2012 and has been the chair since 2018 – this panel is responsible for reviewing the wellbeing of trainees in all three armed forces attending a tri-force training college.
Much of her time is spent supporting the voluntary sector where in 2014 she was appointed a Trustee of the Enham Trust which provides supported and independent living and work for people with a wide variety of disabilities and most recently she was appointed as a Trustee of Countess Brecknock Hospice in Andover. In 2015, Mrs. Scheckter served a one year term as President of the South of England Agricultural Society with a focus on education and inspiring the next generation.
Laverstoke Park Farm donates the use of the farm to host CarFest, an annual family festival of music, cars and food for 28,000 visitors a day for three days and 18,000 campers! Last year it raised just under £1.6 million for BBC Children in Need, a national charity.
Mrs Scheckter was appointed a Deputy Lieutenant of Hampshire in 2013.