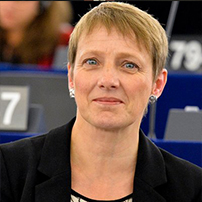 Clare Moody is a Labour MEP representing the South West and Gibraltar. She is a member of the European Parliament’s Committee on Foreign Affairs, the Committee on Industry, Research and Energy and of the Committee on Women’s Rights and Gender Equality (FEMM).
Her work with the FEMM committee has focussed on a wide variety of issues facing women, including supporting gender mainstreaming in the EU budget, addressing the gender pay gap and girls and women’s health and education. She has recently won the support of the European Parliament for her report, which issues specific recommendations for all EU budget titles to pursue equally strong gender targets and gender mainstreaming standards, increasing the level of funds allocated to achieving the objectives of gender strategic engagement in the next multi-annual financial framework. She has also recently completed work on an important new report on combating the sexual abuse and sexual exploitation of children and child pornography.
In the constituency, Clare works with unions, businesses, educational establishments and local citizens across the South West to ensure that the region’s interests are represented in the European Parliament.
She is also a member of the South Caucasus delegation and is joint Chair of the Friends of Georgia Group.
Prior to being elected, Clare had been a trade union official for many years. She has extensive previous political experience, including working as an advisor to Prime Minister Gordon Brown in No 10.”