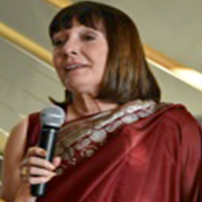 President at Women To Be

Christine Glidden and her husband are a long time residents of Albuquerque,
New Mexico. Christine enjoyed a 25 year career in behavioral health with specialties in addictions and women’s issues. She directed Employee Assistance Programs for both Johnson & Johnson and Cigna. Later, she joined her husband, Jim, in his metal fabrication shop, High Desert Forge, where the couple designed and fabricated Public Art that has been honored with awards by international organizations. Most prominent are the 65’ Tricentennial Towers commissioned by the City of Albuquerque that sit near the City’s Old Town Plaza. Currently, Christine volunteers full-time for a 501(c)3 she created two years ago called Women To Be. This organization fabricates and delivers underwear and washable, reusable sanitary pads to girls and women in the world. “Kits” last up to three years. In May, 2016 for 5 weeks, Christine personally distributed 1200 kits to girls and women in very remote regions at 14,00ft in the Himalayas near Tibet. In September, 2016, she delivered 500 to school girls in Guatemala. Most of these girls and women currently live in humiliation with nothing. Ghana is next on the schedule. Christine and her local assistants also provide a sex education class to kit recipients. Many recipients have no knowledge of how their bodies work and do not link periods with pregnancy. With the calendars Christine provides, they now count days to avoid unintended pregnancy. The organization is establishing sewing centers in these countries. Women To Be wants to pay women in Kathmandu and Guatemala City to sew these kits. This makes the project sustainable and helps women step out of poverty. Christine was honored by her Rotary District with the 2016 “Service Above Self” Award. During her working years and continuing today, Christine has a long track record of public service. She has been appointed by New Mexico Governors to serve on the New Mexico Board of Nursing and the New Mexico Medical Board which are the regulatory boards for nurses and physicians. Later, she became a Commissioner for the New Mexico Arts Commission. Additionally, she was appointed and lated elected Chair of the Board of Trustees for the Albuquerque Museum of Art and History. Christine currently is Chair of Albuquerque’s Urban Enhancement Trust Fund and is in her seventh year as an Honorary Commander at Kirtland Air Force Base, appointed by the Base Commander.
Christine was elected in 2013 by the Bernalillo County Commission as a Trustee for University of New Mexico Hospital, a vast academic/delivery system. On this esteemed Board, she serves as Secretary. In 2013, her daughter, Jenna and she climbed Mt. Kilimanjaro. Christine has completed over 150 triathlons and other endurance events often as the US Southwest Triathlon Champion. In the past, her passions have included professional race car driving and full time ski instructing. She has traveled the world and is committed to be “shocking” in her life. Her first book, “If I Don’t Do It” will be coming out in June, 2017.