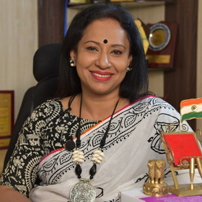 Dr. Chidatmika Khatua, contributed in various social causes since 1996. Aryabhatta Trust,is a leading education institute of Odisha, Bhubaneswar impart teachers training program . Till date more than 4500 trained teachers engaged in various s Government & Private school of India. This Trust also work for Govt. of Odisha in SSPED department for physically challenged & under privileged people in 7 districtof Odisha . The biggest recognition she has got world wide as founder of India’s 1st Tribal Queen Contest “ADI RANI”with a mission to make Tribal women empowerment & uplift tribal culture & tradition with its originality. The tribal queen competition brought huge revolution in India and world. Today due to the revolutionary competition, the perception about tribal women and their community totally changed this uplifted the status of tribal women in the society. The Impact was so huge now it is incorporated in India GK in current affairs as” Who is the 1st Tribal Queen of India “ in almost all competitive exam it has been asked to the students & the answer is Pallavi Durua .

Her dream to creat a brain storming Tribal India where all tribal women will get equal opportunity as other women’s get in the society and connect all tribal women Globally to showcase their talent, tradition and culture worldwide.

Since twenty years she has been working in various places for Tribal livelihood & deep passionate about tribal culture and tribal costumes. This Passion for Tribal culture create her brain child “ADI RANI” with a mind set to give recognition to every single Tribal woman talent, empower Tribal woman and uplift Tribal culture and connect all Tribal women worldwide, because she got to know tribal women till date identified by group only not been recognized individually with their talents and originality.she is now driving for to connect each country/state Tribal women by organizing ADI RANI India, Earth, World&Universe(www.adiranikalinga.com)