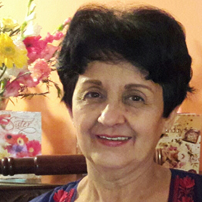 My mother trekked from Burma to India during World War II, she was only 15yrs old. At the age of 18 she married my Kashmiri pandit father. My sister and brother were born in the first two years and I in 1948. The pull of caste, creed and kind on both sides of the family tore at the fabric of a young marriage. My father left to join the Indian Administrative Service when I was but a few months in the cradle, and never returned till today.
We then lived with my maternal grandparents, and after my grandfather died it was a life of pain, hunger and struggle. I have walked the streets at night and slept in parks on stone benches at the age of six. My mother fed us from a big red plastic bowl and for every four rounds we ate, she had just a mouthful. My father never sent us any maintenance, my mother worked as a school teacher to educate, clothe and feed us. As I entered pre-university my mother got cancer and my studies came to a grinding halt as the money had to pay her medical bills.
My mother re-married, my step-father was the kindest man in the whole world. They were married only 5 years when he died of a massive heart attack, just two weeks after my marriage and on my sister’s wedding day. Five years later my only brother died in an air crash in the Indian Air Force, he was only 31 years old. Once again we three women were left to survive on our wits.
I married an airforce pilot but life was a monetary struggle as salaries those days were paltry.
I lived in the shadows of the Airforce world teaching in schools available wherever we were posted, earning a pittance. I then paid my way through college and did my Masters in English Literature.
In 1983, I came to live in Mcleodganj. We had purchased a small piece of jungle on a hillside, built a small room and bathroom where I lived with my mother and daughter cooking on firewood and bathing with water from a stream below boiled in kerosine tins. I taught in Sacred Heart High school where my daughter completed her 10th grade. My husband was now posted in Iraq and I decided to change the existence of a monetary struggle, always broke by the 24th of each month.
So in 1989, I started a patisserie cafe, The Chocolate Log, in a tin shed with a capital of Rs10,000/- loaned to me by my husband. We had no money yet to build a restaurant or buy furniture so I simply scattered mats and cushions under the old oak trees.
The Chocolate Log has been through trials and tribulations and plodded through the years to become nationally and internationally famous. In 2013, I authored an autobiography titled The Chocolate Log, published by Hay House, where you can read my story. I then expanded the business into the Cheryton Guest Cottages, and in 2005 I started my own winery called WINE OAKS.
I am the first woman in Himachal Pradesh to step into the world on manufacturing wine, and was given my license by the then Chief Minister.
I am now 69 years old, after working for 45 years non-stop, first as a teacher, then a Principal of a school in Jamnagar, and now an entrepreneur of three businesses, this year I have hung up my working boots and am training younger local people to carry on the legacy.
I have just completed my second manuscript on women in the world of patriarchy and violence, titled: Sins of Trespass.