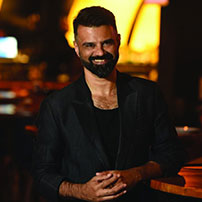 Chaitanya Rao is a Chennai based designer renowned for styling the who’s who of Tamil cinema and Bollywood divas. Having honed his craft at Thai Designs, Bangalore and Color Plus, his creations reflect his flair for illustration and pattern making skills. He has designed for the likes of Asin, Shriya, Shruthi Hassan, Trisha, Nayanthara and Tamannah – the leading
ladies in Tamil filmdom as well as actors such as Ajith, Dhanush, Madhavan, Sttriya and Vikram. He has styled clothes for numerous ad films.
He is also associated with the leather show. This busy designer has worked on Mani Rath¬nam’s `Aayitha Exhuthu’ and Revathi Menon’s film `Phir Milenge’ starring Shilpa Shetty and Abhishek Bachchan, has currently got his hands full styling the top stars of the south. He is the only desgier in Chennai to have styled the Kingfished Calendar Model Contestant. Chaitanya Rao is the first designer from the south who has had his garments shot in Paris for Vogue India. His garments have also been wom by the likes of Kareena Kapoor, Sonam Kapoor, and Miss World Runner-up Parvathi Omanakuttan. Interviews and collections have been featured in leading Indian newspapers and magazines such as Vogue, Hapers, Grazia, Elle, Verve, The Hindu, Economic Times, and Indian Express. He has under his belt 5 successful fashion weeks with Lakmc and is currently working on feature films in both tamil and tclugu.