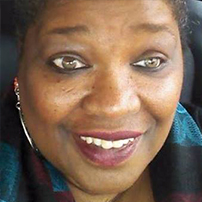 Cathryn McGill, a 2012 YWCA Women On the Move Award winner, 2013 UNM Africana Studies “Person of the Year”, and 2014 NM Business First Woman of Influence and Creative Albuqeurque Brazos Award recipient is an accomplished producer and a favorite featured singer/songwriter/actress in the Southwest. McGill is Founder/Director of the New Mexico Black History Month Organizing Committee and Rainbow Studio Theater, the state’s only professional African American theater troupe. McGill has been a resident of New Mexico since 1984 and has held senior management positions at the City of Albuquerque, the Albuquerque Rape Crisis Center and the New Mexico Jazz Workshop. She has shared the stage with major artists such as Michael McDonald, Lyle Lovett, the late Grover Washington, Jr. and Bo Diddley among others.

Cathryn describes herself as a cultural griot (pronounced gree-oh)—a musician, a storyteller and a unifier. Cathryn life passion and vocation is artsbased community development (e.g. – using the arts to strengthen and bolster marginalized communities and individuals). The New Mexico Black History Organizing Committee, now in its 5th year, founded by Ms. McGill is working year round to strengthen the African American community from the inside out. In 2013, the NMBHOC inaugurated a culturally relevant summer arts leadership academy for Albuquerque youth. The camp is designed to teach leadership and self-esteem utilizing the arts as a tool. Annually, the organization produces a month long festival in February.