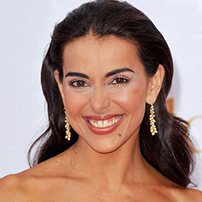 Catarina Furtado, was born 25 August 1972 is Lisbon and is a Portuguese television presenter, actress and United Nations Population Fund Goodwill Ambassador.
Throughout her career on television which started in the early 1990s, she has worked in the most important television networks, as well as radio stations. She is also an actress and has starred in several films, both Portuguese and foreign.
Catarina’s first big success was as a presenter on the TV show Top + on RTP, a Portuguese program featuring popular music videos and the national weekly record chart. It was a music show that led to her hosting a MTV Portugal program on the SIC network, years before Portuguese MTV was founded. She went on to do a variety of shows.
Catarina attended the Conservatório Nacional (until 1990) specializing in dance. She also trained in journalism and studied drama at London’s International School of Acting, as well as Lee Strasberg’s Method Studio in England. She is married and has two children.
She is the founder of the Corações com Coroa (Hearts with a Crown) Association – http://www.coracoescomcoroa.org/ – which is a non-profit NGO that aims to a culture of solidarity, equal opportunities and socio-affective inclusion of people in vulnerable situations, at risk or living in poverty, strongly working towards giving girls and women the necessary skills and tools to thrive, as a means of overcoming Poverty and Social Exclusion.