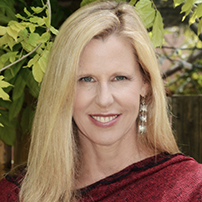 Carolyn Parrs is the founder and Creative Director of Women Of Green, a robust international community online celebrating the courageous and creative women who are leading the way in environmental and social justice movements. From artists to authors, nature lovers to lawyers, activists, journalists, policy makers, social entrepreneurs and more, these women are here to use their voices and velocity to “turn up the volume” of the feminine, and create meaningful change on behalf of the planet and future generations. Women Of Green’s Facebook community is nearing 10K fans.

In 2016, Carolyn produced the first Women Of Green conference in Santa Fe, New Mexico called “Women As Game Changers: Creating a New Game”, which featured Nell Newman, daughter of Paul Newman and Joanne Woodward, and co-founder of Newman’s Own Organics. Prior to this effort, Carolyn produced and co-hosted a global online “Women As Game Changers” Summit. This event launched Earth Day 2016 and featured 27 powerful game-changing women from around the world such as Priscilla Woolworth and Natalie Issacs, founder of One Million Women and girls against climate change. Hence, Women As Game Changers became known for “helping transform the women who are transforming the world” through events, entrepreneurial training, and a strong support system of women.

Carolyn is also the CEO, Creative Director and founder of Mind Over Markets, a creative marketing communications company devoted to helping sustainable, green and healthy brands build a better world for over 13 years. From paradigm-shifting campaigns to growing tribes by tens of thousands, her goal is proving that business can be a force for good. She is a featured author on Green Marketing in Thomson Reuters book series for C-level executives called Inside the Minds: Greening your Business and a founding board member and past President of the Santa Fe Green Chamber of Commerce. As a young copywriter, Carolyn worked at top New York City advertising agencies, such as Benton & Bowles and Wunderman Worldwide, serving clients such as General Foods, Proctor & Gamble, AT&T, IBM, Richardson-Vicks, Manufacturers Hanover Trust, Time/Life Books and more.

She and her products have appeared on television shows such as Good Morning America, ABC News, CBS News and on radio and cable shows such as HBO, CNN and Lifetime Channel. Print coverage includes The New York Times, L.A. Times, Wall Street Journal, Chicago Tribune, People Magazine and Cosmopolitan.
Carolyn is the mother of two and lives in Santa Fe, New Mexico with her daughter and pups, Heart and Soul.