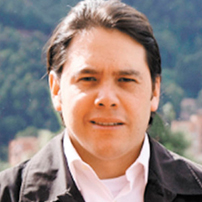 Carlos Eduardo Huertas is Director of CONNECTAS and also the Chief of Party of the Investigative Reporting Initiative in the Americas, a project of the International Center for Journalists (ICFJ). CONNECTAS is a regional platform that promotes the interchange of information and knowledge about key issues in the Americas. It started during Huertas’ time as a Nieman Fellow 2012 at Harvard University with support of the Knight Foundation. For more than a decade and until July 2013, Huertas worked with Colombia’s leading Semana Magazine, where he served as Investigations Editor.

Huertas began his journalism career as a correspondent for the Press and Society Institute (IPYS) in monitoring press freedom in Colombia. In 2006 he founded Consejo de Redacción (CdR), a professional association that promotes investigative journalism in Colombia. He has been a member of the International Consortium of Investigative Journalism (ICIJ) since 2011, and participated in several of its investigations, including Swiss Leaks and Panama Papers. He was part of the first elected board of Global Investigative Journalism Network (GIJN). His reports on corruption, human rights, and environmental issues have earned him several honors, including the Award of the InterAmerican Press Association (2015), the King of Spain Award (2008), and the IPYS – Tilac Award for best investigative report in Latin America (2007, 2009).