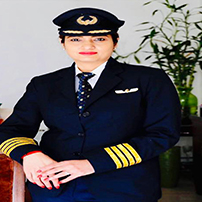 Capt Shweta Singh, Truly an Avid aviation person. She is the first Lady Pilot who holds an enviable position of Deputy Flight Operation Inspector with the Directorate General of Civil Aviation, she comes from a family with Army background. Her dream of flying started after sitting in the seat of a display aircraft that was parked in front of her house at an Airforce station where her dad was posted as a Station commander. She worked hard and obtained her Pilots license and went up to become a Captain in a leading airline on Boeing 737s. Today she enjoys the privilege of certifying airlines that operate more than one hundred aircraft, she is the examiner of examiners and Inspector of Inspectors in DGCA, she certifies the state of art Simulators that train pilots of all categories. This is definitely a far cry from the days when she played in the little model aircraft parked in front of her house at the Army station.
She is of a firm belief that there has to be more women in challenging positions at the top to motivate young ladies to come up in this onerous profession of flying. She has encouraged many young ladies to become budding Pilots.
ACHIEVEMENTS SO CAPT SHWETA SINGH

1. SHWETA HAS PROFESSIONALLY ATTAINED THE HIGHEST POSITION AS CHECK PILOT, INSTRUCTOR AND EXAMINER FOR BOEING 737 JET
2. SHE IS THE FIRST LADY DY. CHIEF FLIGHT OPERATIONS INSPECTOR IN DIRECTORATE GENERAL OF CIVIL AVIATION
3. SHE IS THE FIRST PILOT TO RECEIVE THE NATIONAL GAURAV AWARD THIS YEAR.
4. SHE PLAYED A MAJOR ROLE IN GETTING HER TEAM READY FOR FAA AND ICAO INSPECTION AND FOR FAA UPGRADE FOR DGCA
5. SHE IS ALSO RESPONSIBLE FOR CHECKING OUT THE TOP EXAMINERS OF MAJOR COMMERCIAL AIRLINES
6. SHE IS ONE OF THE FIRST EVALUATORS OF SIMULATORS THAT ARE USED FOR TRAINING BY THE TRAINING ESTABLISHMENTS.
7. SHE MEMBER OF VARIOUS ORGANIZATIONS WHICH ENCOURAGE INVOLVEMENT OF LADIES IN THE FIELD OF AVIATION.