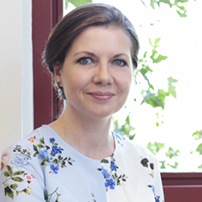 Camelia Ilie – Cardoza is Dean of Executive Education and Chair of the Center of Collaborative and Women´s Leadership at INCAE. She teaches leadership based on neuroscience findings, organizational transformation, and change. She is an engineer with specialization in Optical and Biomedical Devices from Polytechnic University of Bucharest, with a Doctorate Summa Cum Laude in Management Education from the University Pontificia de Comillas, and DEA from the University Complutense in Spain.
After beginning her career as a research assistant in atomic physics and military technology, she held executive and academic appointments in leading Spanish institutions such as ESADE and IE and developed alliances with Georgetown, Babson, Columbia University, among others. She has designed more than 200 degree and non-degree programs and did consulting projects in Europe, United States, and Latin America for organizations such as Telefónica, Banco Santander, BBVA, Iberdrola, Banco de España, Copa Airlines, PWC, E&Y, Novartis, IADB, among others.
She has been involved for more than 15 years in the leadership of Women´s Programs in Europe and Latin America, such as LIDERA program in Spain, under the auspice of the European Union, which has prepared more than 1,000 women for top management positions. At INCAE she has created a portfolio of programs for high potential, senior management, and women entrepreneurs which amounts more than 300 graduates in 15 Latin American countries to date. Her research in Women Social Progress and Women and Entrepreneurship includes surveys to more than 6,000 women in 10 Latin American countries and Spain.
Additionally, she does research in management education, and more recently, in happiness and management.
She is a member of the Board of UNICON Consortium of Executive Education which includes more than 100 schools all over the world and is an External Advisor of the Institute for Advice Studies of the Americas at the University of Miami. During 2019, she is a Visiting Scholar at the Rockefeller Center for Latin American Studies at Harvard University.