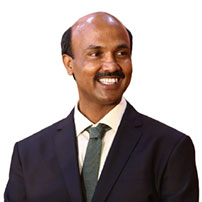 C.GovindaKrishnan, , started his life on the 10th of May, 1971 at Chennai, which has also been his home for the past 46 years. Despite being visually challenged at birth, his parents insisted that he pursue his education in a general school rather than a special school. Thus, he went on to complete his schooling and then his Bachelors and Masters degrees in English Literature. His college days were instrumental in shaping him as a person, as it was then that C. Govinda interacted with several visually challenged students, who were also his fellow students, and understood their plight. The seed for his passion for serving this sector of people, which was sown at that time, has grown massively today.
In an effort to make things easier for the visually challenged community, he have been instrumental in establishing various reading centers in several places across the Chennai city. He have also been active in mobilizing financial support for the visually impaired students, so as to enable the funding of their college education. C. Govinda have also spearheaded several campaigns, movements and welfare activities for the visually impaired students both at the government and at the college levels.
After the completion of his education, he was presented with an opportunity to work with an organization for the welfare of mentally ill destitute women, as their project manager. During his six year tenure with them, he found himself working with over a hundred destitute women, eventually leading to their recovery and restoration with his family. From there on, he went on to pursue his PG Diploma in Social Entrepreneurship with the Center for Social Initiative and Management.