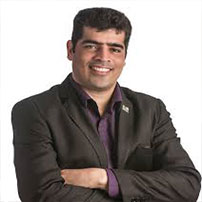 Official Message from the Vice President of Suriname

Bio An engineer by profession, H.E Michael Ashwin Satyandre Adhin did his Bachelor’s in Electrical and IT in Anton De Kom University, Suriname in 2003 and his Masters in Electrical Engineering and Telecommunication in Delft University, the Netherlands.

He started his career as Lecturer, Head Supervisor and Joint Coordinator in Anton De Kom University, Suriname. In July 2013 he was chosen as Minister of Education, Science and Culture and thus joined Politics as a member of National Democratic Party (NDP) of President Bouterse. He successfully contested the May 2015 General Elections and was chosen as Vice President.He heads the Council of Ministers. He is one of the youngest Vice Presidents. He is married to Ms. Gracella Vandana Adhin.
H.E Mr. Adhin is also an avid Yoga practitioner and healer, student and teacher of Hindustani classical music, vocal, Tabla and Harmonium. He was National Checkers Champion of Suriname in 1997, 1998 and 1999.