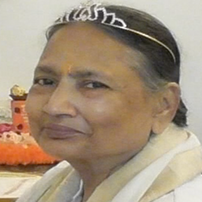 Difficulties are easy to run away from, every aspect of life is easy, Do not get scared people in some life, Where do the guts go in the steps. And when every step of your life with your unshakable belief in God and with them, no difficulty can touch you in front of you. …
An example of such unshakable faith and courage is B. K. Geeta Devi Chandak
If Gita Mataji spoke about childhood then she was quite abnormal…
While the other children of their age were busy playing talks with their children and age, Geeta Mataji liked it, sitting in the temple and being happy in the remembrance of God …. This is also the reason for the values and inner The foundation of qualities and powers to be strong in every condition … their Strong Will Power … and their every intuition clearer and to be real
As Gita Mataji grew in age … her faith and attachment in God became even deeper … assuming Shri Ganesha as her brother, she kept rakhi every year and kept herself safe in every trouble
And this was the result of Bhakti which had the fate of joining Brahma Kumari for holding the Gita knowledge of the divine Lord Shiva … which became the biggest force in his life.