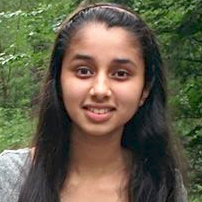 Student at University of Warwick

Bisman Deu, 18 years old, is currently studying at the University of Warwick. At the age of 15, she invented a low cost building material, ‘Green Wood’, made up of rice waste, which aims at providing affordable housing to the underprivileged. She is a passionate public speaker and is a national debate winner.
Deu was invited by UNICEF to the launch of their Flagship publication, ‘SOWC 2015’, to which she had also contributed an essay, as a keynote speaker and panelist. She was further involved with UNICEF as a judge for their ‘Wearables for Good Challenge’. She was a highlighted speaker at Nexus Global Youth Summit in New York and was the leading voice at the Nexus India Youth Summit.

Bisman is not only passionate about sustainability and innovation but is also an ardent supporter of women rights and women empowerment which led her to start her own campaign, ‘Colour the World Pink’. This campaign aims at promoting entrepreneurship and leadership among girls with an attempt to bridge the ambition gap.