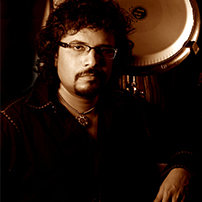 He has played on four Grammy nominated albums, one of which won the Grammy. Along with Sonu Nigam he was long list nominated for the Oscars for Best Original Score in 2014 for the Hindi film Jal. He has been awarded the second – highest West Bengal state recognition – Bangabhushan as well as the highest state musical award – Sangeet Mahasanman.
He has received the Global Indian Music Academy award twice; first for his recreation of the national song Vande Mataram and again for the score of the film Jal.
Ladies and gentlemen he is at once
one of India’s greatest Tabla maestros as well as a pioneer in the world of fusion music. He is also one of our top music composers.
He is none other than – Maestro Bickram Ghosh.
Having performed the world over with the greatest names in Indian Classical music,(especially Pt. Ravi Shankar with whom he played for over a decade), Bickram went on to form his hugely successful band Rhythmscape which made him one of the most popular musical stars of his generation.
Bickram’s subsequent super successful solo albums like Beyond Rhythmscape, Folktail, Drum Invasion. Kingdom of Rhythm, Interface, Electro classical, Transformation etc have consolidated his position as a great innovator of sound.
Bickram has composed for 20 feature films so far including the Mira Nair presented, Sooni Taraporewala directed Little Zizou. Bickram has now teamed up with Bollywood singing star Sonu Nigam and together the duo work as co- composers in Bollywood.
Bickram’s score for three of this year’s top Bengali film hits Ebar Shabor , Kadambari and Har Har Byomkesh have become the talk of the music industry. The music of latest thriller released recently, Eagoler Chok has also been composed by him.

The son of the illustrious tabla maestro Pt. Shankar Ghosh and well known vocalist Sanjukta Ghosh, Bickram also learnt the nuances of Carnatic percussion from the great Maestro of the mridangam Pandit S. Sekhar.
Bickram Ghosh was the brand ambassador for the Indian Election commission in 2011 in West Bengal and his participation led to a record 8.5 percent increase in urban voting.

Maestro Bickram Ghosh has over 100 albums to his credit.