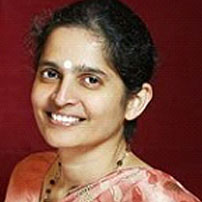 Professor Bhavani Rao R. is the Director of AMMACHI Labs, the human-computer-interaction research-and-development center at Amrita University and The Center for Gender Equality and Women’s Empowerment. In addition to serving as Director, she also holds the UNESCO Chair on Gender Equality and Women’s Empowerment. Her work has been closely associated with the United Nations and the Government of India on several flagship projects. AMMACHI Labs pioneers research and development in technologies such as haptics, VR, AR, robotics and automation, towards skill development in the areas of TVET and 21st century skills. Technologies developed in the center are used to train women and young adults in 35 rural centers as well as 12 PMKVY centers across the country.

The focus of research at the Center for Gender Equality and Women’s Empowerment as well as the UNESCO Chair, is on Vulnerability Mapping, to inform design of optimal interventions that further the vision of women’s empowerment and gender equality, building towards inclusive sustainable development. International projects under the Center for Womens Empowerment and Gender Equality include those funded by the UN and the Government of Israel.