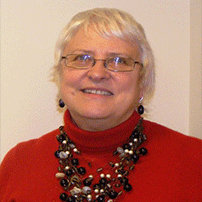 Professor Dame Betty Kershaw; DBE, OSt.J, FRCN, RN, RNT, MSc, LL.D (Hon) Emeritus Dean, The School of Nursing and Midwifery, The University of Sheffield.
Honorary Posts: Member, Christie Hospital Education Committee Chair, Elizabeth Bryan Foundation Trust.
Awards: Created DBE 1998 for Services to Nursing and Nursing Education; Education Officer of the Order of St John, 1998; Member Sigma Theta Tau (USA/UK) (April 2000 – present); Fellowship of the Royal College of Nursing 2001; Woman of the Year 2005; American Biographical Institute; British Journal of Nursing Lifetime Achievement Award 2007.
EMPLOYMENT HISTORY : My nursing background was in Ophthalmology, Surgery, Cancer and Operating Theatres, all in the Manchester area. I qualified as a Clinical Teacher in 1975, becoming a Registered Teacher in 1978. I was appointed Director of Education at the Royal Marsden Hospital in 1984. In 1987 I joined Stockport Health Authority as Director of Nurse Education and by 1995 had successfully helped move the 13 Greater Manchester Schools of Nursing and Midwifery into an amalgamated College (1991) and then a University School (1995). My responsibility in all this was the education and training of nurses and the management of those who taught them. The re-structuring necessitated redundancies and re-deployment and the process of down-sizing taught me new management skills over and above those needed for managing change.
I moved from the University of Manchester in 1999 to take the Dean’s position and Professorship at the University of Sheffield. Here I had direct responsibility for handing the professional side of all contractual arrangements and direct responsibility for managing the budget and the quality agenda. I was elected Deputy Dean of the Medical Faculty in 2002 taking on responsibilities for Learning and Teaching issues, including Student progress. I was also involved in multi-professional performance review and working with the UCU and NUS. For two years (2000-2001) I was a Non Executive Director and Mental Health Officer for Rampton Hospital, retiring when the Hospital was absorbed into the Trent MH Trust. I served in a similar role with Manchester Mental Health and Social Care Trust from 2008-2001 stepping down as the Board changed as they moved to apply for Foundation Trust status.
I retired from the University of Sheffield in September 2006. Although never setting myself up as a consultant I have enjoyed a variety of opportunities to develop and expand my experience, including a part-time post at The Royal College of Nursing as their Education Adviser, From April 2008-January 2011 I lead their professional education interests nationally and internationally, working with other Royal Colleges, Unions, Governments, the media and the Statutory Bodies.
INTERNATIONAL WORK: I have long been an occasional consultant to ICN, WHO and CNF.(Commonwealth Nursing Federation) From 1988 to 2003 I spent some time each year in Malta advising the Health Minister on Nursing and Healthcare education, at the invitation of DH (England). I have been providing email advice to them recently on an MSc course for Elderly Care. I was the CNF European Board member from 1994 to 2004. Again at the invitation of the DH the University seconded me to DFID in 2002 to join an NHS development visit to Columbia and Chile. Since 2005 I have worked with the Commonwealth Institute primarily in the field of Managed Migration making in-country visits to Sub-Sahara Africa, South Africa, the Caribbean and Malaysia, The most recent visit to Malaysia involved a presentation to the Pan-Commonwealth Ministers’ meeting on GATS 4.
PROFESSIONAL ACTIVITY: Since retirement I have held Honorary Chairs at Manchester Metropolitan University and Birmingham City University, held a Teaching Fellowship at the Buxton Campus of Derby University during the 2008/9 academic year and was a member of the Editorial Board of Nursing Standard for many years International presentations include the European Student Nursing Association in July 2008 on “Leadership in Nursing”, ICN in South Africa in 2009 “Exploring simulation: its role in supporting learning”, the RCN Orthopaedic Conference in September 2009 on “The Value of Nursing” and to the Manchester Chamber of Commerce in Nov 2010 on the Govt White Papers oh Health.. In July 2009 I chaired the National Council of Women’s conference. I opened the Manchester Lit. and Phil. Society Annual lecture series in September 2009 with a presentation about the work of famous local nurses.
More recent presentations in the UK include lectures to the American Universities Easter Schools on the NHS, Past and Present, and work around Dignity and Quality with the RCN. I have been involved with the House of Lord’s evidence collecting seminars on Dementia care through voluntary work with Alzheimer’s organisations, attending their Focus group in February this year The RCN Consultations on “End of Life Care” and “Caring for older people” have also interested me , and I have enjoyed contributing to the debates
I went back to my roots in 2015 when giving a keynote presentation for the MREH 250 year Anniversary Conference about Nursing at the Eye Hospital. I gave several lecture in 2016 and 2017 on the role of Manchester area (Cottonopolis) Matrons in the Wars, including at the Universities of Manchester and Chester, and to the Army Nursing service here in the city. I will present at a joint RCN/Territorial Army regional conference in March 2018

I have published and presented extensively since the early 1980’s, primarily in nursing education but more recently on Inter-professional and International issues.

MENTORING :I have mentored for the DH Leadership Schemes for some years, including their Leadership Development programme for Black and Ethnic Minority nurses, more recently for the Council of Deans and supported RCN members following the RCN Political Leadership programme. Some of this work attracts a fee: most does not. I have also advised the Sheffield Diocese on mentorship for Ordinands. In 2015 I accepted an invitation to Chair The Elizabeth Bryan Foundation Trust, a charity that offers mentorship to groups who find it difficult to access mentors within their workplace. Our clients include GP practices and the clergy. We are currently winding up the charity as an independent body, moving it into the University of Central Lancashire as a “stand alone” unit working on developing compassionate organisations

VOLUNTARY ACTIVITY:I have been an active member of the RCN since the 1960s and from 1994-1998 was President, elected by all members. This brought me into contact with the Departments of Health, the Government Health Committees, Health Ministers and other key players in the wider field of Health and Social Care. I continue to be in contact with some of these groups and individuals both through my post at the RCN and informally. During my time as President (and since) I have continued to develop my skills at dealing with the Press, including television and radio. I now fundraise for the Christie Hospital and am a member of their Education Committee.

From 1998-2006 I was the Chief Nurse for St John Ambulance, one of the largest voluntary organisations in the UK. This is an a-political organisation requiring different skills from working with the RCN. Much of that work involved co-operating with the Red Cross, who share much of the same role, especially around International relief and UK civil emergencies. The Red Cross competes at local level with St John for business, donations and members and the tact and diplomacy required to work closely on national and international issues taught me much. Whilst at St John I was involved in their work on Risk assessment and helped to develop their Governance agenda

I was a Trustee of the GNC Trust (2006-14), Chair the UK Centre for the History of Nursing and Midwifery, was President of my Training Hospital Nursing League (2006-12) and serve on an Accommodation committee for the University of Manchester.

OTHER INTERESTS: Gardens (but not gardening), my family and friends, Music and the Theatre, Travel and Historic buildings.