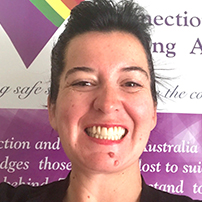 Bella Broadway has been working in the Disability, Training, Mental Health, Trauma Support, Behaviour Intervention, Child Protection, Education and Advocacy sectors for over 18 years. During this time Bella has performed a variety of roles in both Government and Non-Profit organisations within different states of Australia. Bella is the former Manager of Living Proud, and Western Australian Coordinator for the QLife Teleweb Counselling, Information, Support and Referral Service. Bella is passionate about working towards a suicide safer community, and was honoured to lead the Living Proud team to be awarded the Suicide Prevention Australia LiFE Award for Excellence in Suicide Prevention (Community Development) in 2015. In 2016 Bella was proud to be part of the Suicide Prevention Australia conference in Canberra, in her role as a LiFE Award judge, and as a Presenter in the Building Workforce Capability stream, with her paper “Lessons learned in delivering Lived Experience / Peer Perspectives (LEPP) programs”. She was also thrilled to lead the Western Australian QLife Volunteers to be awarded the Suicide Prevention Australia LiFE Award for Excellence in Suicide Prevention (Community Development) 2016. As a key advocate and trainer for delivering suicide awareness and intervention trainings to the West Australian LGBTIQ community and for striving to create best practice amongst Livingworks ASIST and safeTALK trainers to ensure that their practices are inclusive, Bella along with her Living Proud colleagues received a certificate of recognition at the inaugural Livingworks Australasia Conference (2016). In March 2017, Bella was invited to take part in the Western Australian National LGBTI Mental Health and Suicide Prevention Strategy Roundtable facilitated by the National LGBTI Health Alliance. Helping to further Bella’s support of suicide prevention trainers to develop their LGBTIQ+ cultural competency. In April 2017, Bella arranged and facilitated the inaugural meet up of ASIST and safeTALK trainers who are based in Western Australia. These quarterly events will help trainers connect with one another, share wisdoms, support one another and develop their practices. Bella was a shortlisted finalist for and Individual award for the Suicide Prevention Australia LiFE Award for Excellence in Suicide Prevention (Community Development) 2017. In 2017, as the founder of Connection And Wellbeing Australia (CAWA), Bella was the proud winner of the Best New Business Award at the Belmont and Western Australian Small Business Awards.