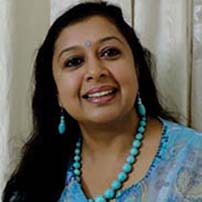 Hailing from a small town in Kerala, she married an army officer and traveled within India and abroad, meeting people from all walks of life in remote difficult areas. Starting off as a teacher, she became a school principal, and after decades, ventured into writing and consulting, and is now the Academic Head of Jaipuria Group of Schools, managing more than twenty schools all over India. Throughout her career, she continued learning, and has two Masters’ degrees and an M.Phil, as well as diplomas from IIT Delhi and IIM Ahmedabad. Through her career, she has worked to empower women – from designing learning programs for tribal girls in the North East, to counseling women separated from their spouses by the tumultuous nature of military life. She is an active member of the Army Wives Welfare Association, setting up Skill development centers, empowering women and organizing revenue generation projects- like Swavlambhan.