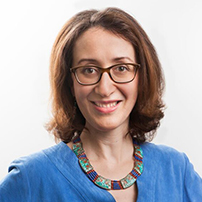 Beatrice Nere works at the European Office of the Bill & Melinda Gates Foundation based in London, and leads on relations with France, the G7/G20, and oversees a team working on Italy, Spain, Russia and Turkey policy and advocacy. Beatrice is a member of the Advisory Committee of TEDx Paris and its do-thank initiative “L’Echappee Volee”, as well as the Tocqueville Challenge led by its Foundation. Beatrice is also a guest lecturer for Master Students at Sciences-Po, the main and most prestigious school of political science in Paris. She was in 2015 part of the Expert Group of the Positive Economy Forum which developed concrete proposals to French President Francois Hollande on how to best tackle poverty.
Beatrice previously worked out of the Seattle office of the foundation within the Global Health Policy and Advocacy team for three years before joining the European Office in 2010. Beforehand, Beatrice worked as a Public Relations officer at a law firm, following closely the implementation of EU legislations at the national level, and coordinating advocacy in Paris with various parliamentarians and media stakeholders. Beatrice holds a double Master in European Politics and Governance from the London School of Economics and in European law and Institutions from La Sorbonne University