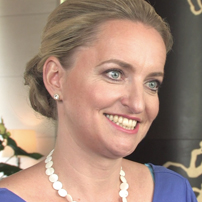 Originally from Slovakia, Bea was raised believing that she can make a difference in the world. Aged 15 at the momentous fall of the Berlin Wall, she witnessed Slovakia become a canvas – a canvas on which she knew she could contribute to creating a new design for our society. At this crucial time of transformation for Slovakia, her desire to understand and impact Slovakia’s newly developing economic system and its relationship with the international community, led her to gain her first Masters degree in Banking and Economics.

Following various management positions in business, in 1994, Bea was headhunted to serve as personal assistant to the former Slovak Deputy Prime Minister for Economic Policy – a woman renowned for her high levels of expertise, integrity and grounding, and a wonderful inspiration to her. Her interest in understanding Slovakia’s connection to the world grew, and after gaining an Open Society and Chevening Scholarship through the British Embassy, Bea moved to the UK in 1999 to study at Oxford. Consequently, she completed her second Masters degree in Risk Management at the prestigious ICMA Centre at Reading University.

For the next five years, Bea worked for a number of large financial institutions in the City of London and also co-founded the Slovak British Business Council (SBBC), a London-based organisation for which she served as Chairman of the Board two and a half years. Whilst working in the high-pressure environment of the City of London, she began to notice the impact of that
environment on people, particularly women. She witnessed many people being unhappy, unsatisfied and burning out, and women surrendering their femininity and emotional fitness to succeed in the corporate world. Her belief that she could make a difference kicked in. When she completed a personal transformation programme on September 11, 2001, the day the World Trade Center and US Pentagon were attacked, Bea understood that we have to do what we authentically love doing to find fulfilment and ultimately live a life worth living. Ever since she dedicated her life to finding and developing her talents and passions, living an authentic life and helping others do the same. First, as a complement to her banking career and later as her full time occupation – with the focus on making a difference to women.

Since she left banking in early 2007, she has inspired, empowered and guided prominent women around the world, including leading women executives, entrepreneurs, politicians and artists – to discover and express their unique talent, femininity, and leadership so that they can naturally fulfil their potential and purpose, experience vitality and fulfilment, sustainably increase their performance at work, and be a valuable contribution to the organisations and communities they belong to. Over time she presented her unique approach to holistic development of women and integrated women leadership internationally, including the UK, Hong Kong, USA, Czech Republic and Slovakia as well as at the Harvard Business School and in numerous media. In her home country Bea was profiled by the leading Slovak business newspaper as “Slovak Recipe for Success” as well as included in the National TV Documentary about the “Successful Slovak Personalities in the World.” Bea Benkova founded the Global Institute of Extraordinary Women in 2012 to further expand on her vision to transformation of humanity through the aligned power of extraordinary women. GIFEW is dedicated to holistic collaborative transformational education of women around world and over the first year of its existence has made a difference to hundreds of women across three continents, including her home country of Slovakia.

Now on the Board of Directors for the Association of Transformational Leaders – Europe and through GIFEW’s Constellation Mentoring Program, Bea is passionate about empowering female ‘Changemakers’ around the world to promote societal transformation. Currently Bea shares her time with her husband Jan Polak between their two residences in London, England and Bratislava, Slovakia.