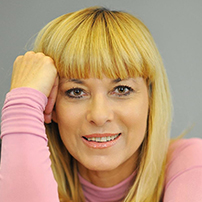 Barbra Jermann is a Slovenian journalist educated by University of Ljubljana, Faculty of Social Studies FDV. She has begun her career on Slovenian radio (RGL, 1985) and soon advanced to national Television (RTVSLO). First she worked as a host of an entertainment live show called ZDRAVO, NEDELJSKIH 60. Then she became a researching journalist (1996) of the most viewed TV show called Tednik and later advanced to a position of the host. After twenty years working on the national television as a researching journalist, she decided to change careers and moved on to the written media. She became the editor of a legendary tabloid magazine called Lady (2008 – 2014), which under her supervision raised the number of printed copies due to a rapidly growing audience. As of 2016 she acts as an editor in chief of a weekly magazine named Suzy which concept and team was designed and chosen by her. As of early 2018, the magazine has became the best-selling Slovenian weekly magazine/tabloid due to a fresh approach by switching the gossip-based Celebrity stories with the ones based on motivation, stories of personal growth and spirituality. She considers herself to be a creative worker who empowers her co-workers to thrive as they empower her to challenge herself and the public. She is an excellent team leader and is very prone to work with a larger group.