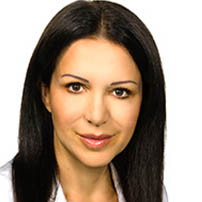 Barbara Kappel is an Austrian politician and Member of the European Parliament (MEP) from Austria. She is a member of the Freedom Party of Austria, part of the Europe of Nations and Freedom.
Professional background:
• Studies of economics and social sciences at the University of Innsbruck
Master of Economics (Mag. Rer. Soc. Oec.)
• Doctoral studies in economics and social sciences at the Universities of Innsbruck and Vienna
Doctorate in Economics (Dr. rer. Soc. Oec.)
• 2000 – 2006: office manager of the II and III. President of the National Council,
focus on economic and financial policy
• 2006 – 2015: Managing Partner of Austrian Technologies GmbH
Political career:
• 2010 – 2014: Delegates to the Economic Chamber of the Vienna Chamber of Commerce
• Member of the Board of the Economic Platform “Pro Mittelstand” – Freedom and Independents
• 2010 – 2014: Provincial Parliamentary and Municipal Council in Vienna
• since July 2014: Member of the European Parliament