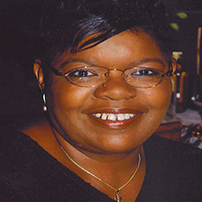 Barbara Jean Wilson was born and raised in Flushing, New York. She relocated to Manassas, VA on December 15, 1995 to accept a Legal Secretary position with a law firm in Washington, D.C. Within six months of moving to Virginia, not only was Barbara blessed with her first home, but she was also blessed to find a warm and loving church, First AME Church (“FAME”) of Manassas, where she would continue to serve the Lord and receive spiritual guidance from Rev. Ronald A. Boykin, Senior Pastor and the lovely First Lady, Mrs. Helen Boykin, who she looked to as her spiritual parents.
In September 2003, Barbara enrolled at Strayer University in Manassas, and graduated with a Bachelors Degree in Business Administration in June 2008. In August 2004, she began working at Federal Home Loan Mortgage Corporation (Freddie Mac). For her hard work and team spirit, she has received numerous Division and Corporate awards.
Barbara relocated from Manassas VA to Massaponax, VA in 2004 and moved her church membership from FAME to Mount Hope Baptist Church, where she continues to receive spiritual guidance from Dr. Raymond A. Bell, Jr., Senior Pastor of Mount Hope Baptist Church.
In 2009 Barbara put her full concentration on the completion of her first book, which she began writing in 2003. Mute But Now I Speak was completed in November 2010, and was published February 15, 2011. Barbara is always reminded of the promises of God in:
Barbara currently lives in Massaponax, Virginia with her daughter Tawanna.