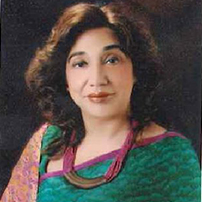 Bandana Singh , has an enriching experience of almost 30 years , as a Corporate Professional and Entrepreneur .
She commenced her career from Hospitality Sector. Moving onto working with Diplomatic Missions, Foreign/Indian Schools,( South Korean Embassy/Canadian High Commission/ American School ) and Risk Management & Insurance Industry ( Royal & Sun Alliance ). As a modern female entrepreneur, utilizing her MBA in Marketing, Bandana has operated & managed an apparel business , also provided consultation in Corporate Communication & Events. Bringing her career up-to date Bandana is now working with G4S Secure Solutions- a Global Integrated Security Solutions Provider, for a decade now , presently holding the role as Vice President- Diplomatic Missions & UN.
As the Director – Marketing Services , she has handled Branding, Marketing , Big Events/ Launch , CSR, Communication , Website, Designing uniform,Designing Marketing Collateral’s. Not enough on her platter with this senior position, she combines her role with that of advisor to NRI Institute (NRI Institute started as a Non Profit NGO in 1989, is diligently working to connect Indian Diaspora ) & JMS Foundation ( that is dedicated to the welfare of marginalized girl child ). She is also holding the position of Vice President to the Forum – Indian Council of UN Relations ( ICUNR – Working towards the objectives of UN in India ).

• In August 2016 – Appointed to the Organising Committee for Saragarhi Foundation in UK by Lord Field Marshall John John Chappel .

• In 2015 Jan, she was conferred with an award by Former PM Dr Man Mohan Singh “ Successful Corporate & Entrepreneur” from India .

• And In February 2015 she was crowned Mrs India Classic Queen “ Woman of Substance “ at a grand pageant in ITC Maurya by Mahima Chaudhary( the famous Bollywood actress , and Mrs Ritika former Mrs Asia Pacific ) .

• She was accredited from G4S as the brand Ambassador for the Commonwealth Games to the British Team of 900 contigent.

In her business life she blends dynamism with a certain style and is a committed believer in the need to further develop and empower the woman in industry and commerce.
She has joined Dr Kiran Bedi ( the first Traffic police Commissioner In India ) for various Projects “ Women Empowerment “ , “Gurgaon Go Green”.
Assisted and supported Diplomats for various Industry events & Award Functions. Has been awarded certificate for Training in Woman Self Protection & Safety Training in 2014.
She is pillar of strength for woman empowerment . Has been invited as a speaker at various forums on Skill Development , Woman Empowerment ,
Communication skills , Soft skills & Ettiquetes Single handedly brought up a daughter of 3 years after a tough divorce .
She combines her exacting role of professional executive with that of being mother to a 22 year daughter . During the little time left that gives her she indulges in her passion for designing clothes, likes to travel, loves gardening , interacting with people and cooking