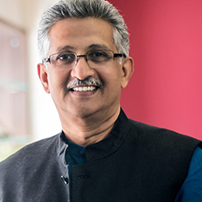 B S Nagesh has been involved with Shoppers Stop and its group companies since its inception in 1991 as the first employee. As part of his personal philosophy of Learn, Earn & Return, he stepped out of the day – to – day roles of the business as MD in 2009 and founded TRRAIN. He is currently the Chairman and Non – Executive Director of Shoppers Stop Limited and is also the Founder Chairman of RAI (Retailers Association of India). B S Nagesh is on the Board of IGDS (Intercontinental Group of Departmental Stores), a global association of department stores, and the Vice-President for Asia, for IGDS. He is also on the board of Marico Limited and Kaya Limited. With his induction in the World Retail Hall of Fame in 2008, Mr. Nagesh is the only Indian retailer and the first Asian retailer to take a significant place alongside more than 100 stalwarts of the global retail industry.Recently he was awarded with the prestigious NCPEDP — Hellen Keller Award for creating livelihood opportunities for Persons with Disabilities and was recognized as the Change Maker at the Sabera Awards. He has been honoured as an Ashoka Fellow in 2019.