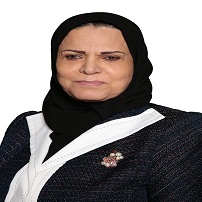 In 1968, three years before the information of the Union of the seven Emirates, Dr. Ayesha Bin Ali Al-Sayyar became the first UAE female citizen to acquire a university degree. To accomplish this feat, she had to travel abroad airplanes run by the protecting British authorities, as there were no formal airports in the UAE and no regular flights.
In 1973, she became the first UAE citizen to hold a Master’s degree. Then in 1983, she became the first UAE citizen holding a PHD degree.
Also in 1973, she became one of a handful of UAE leading youths who found the Ministry of Education. She also started the program of social service in MOE, and the program for Special Needs students.
She started and supervised a program for the identification, support, and rehabilitation of special needs students in the whole country.
Dr. Al-Sayyar represented the UAE in many global conferences; among them is a conference in Mexico in 1975 where Dr. Al-Sayyar presented the findings of a study she had prepared about women’s good standing in the UAE; another conference was help in Copenhagen in 1980 where Dr. Al-Sayyar presented again a paper on the progression of women in UAE society. She also attended a conference in Beijing in 1995.
Dr. Al-Sayyar also represented the UAE in UNESCO conference for more than 25 years.
She also participated in founding the Umm al-Moomineen Lady society in Ajman.
And in 1975, she became one of the founders of the UAE General Women’s Union. She also participated in writing the statutes for the Zayed Bin Sultan al-Nahyan Charitable and Humanitarian Foundation. She also founded the Social Security Fund in the M.E. In 1996, Dr. Al-Sayyar wrote the statuses for the Higher Council for Children in Sharjah.
Dr. Al Sayyar founded and organized the Convention of Arab Children in Sharjah. This biannual convention hosts two children from each Arab country for a week in Sharjah. The event brings cultural, scientific, sporting, and artistic activities.
Charitable work by Dr. Al Sayyar: