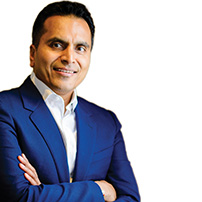 Avnish Goyal is the Chair of award-winning care provider, Hallmark Care Homes which he founded with his brothers in 1997. He was initially attracted to the industry by his desire to make a difference and by purchasing his first care home in Wales, he began the journey to realise his vision of becoming recognised as one of the leading providers of high-quality care. Over the last 22 years the company has won numerous awards for delivering outstanding care as well as awards for building some of the best care homes in the country.

In 2010 Avnish set up the Hemraj Goyal Foundation in memory of his late father to get his extended family and next generation involved in philanthropy. He works very closely with his wife Anita focusing their efforts to most disadvantaged in society, often women and children, supporting charities on issues such as FGM, Menstrual Dignity, empowerment of women and education of street children as examples of projects both in the UK and abroad.

Avnish and Anita also regularly host personal development seminars for the general public as part of their giving back on a range of subjects including relationships, goal setting and creating a vision board to empowerment days.

He is proud to be the Chair of Care England, the largest trade association for the care sector and the founding trustee of The Care Workers’ Charity. He is also currently writing his autobiography on his life lessons for success and happiness.