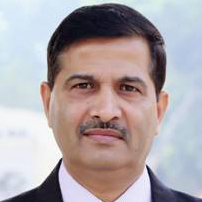 Chairman, Railway Board (Ministry of Railways)

Shri Ashwani Lohani, IRSME is the Chairman, Railway Board (Ministry of Railways) and ex-officio Principal Secretary to Government of India vice Shri A.K.Mital. Prior to this assignment, Shri Ashwani Lohani was serving as Chairman and Managing Director, Air India.
After assuming charge, Shri Lohani held a high level meeting with the Railway Board Members. Later, he also addressed the officers & the staff of Railway Board.
Shri Lohani has worked in various capacities in Ministry of Railways, Union Ministry of Tourism and in Government of Madhya Pradesh. Within the railways he has worked on the South Central, Eastern and Northern Railways besides the Diesel Locomotive Works at Varanasi and the Integral Coach Factory, at Chennai.
He has worked as the Chief Administrative Officer of the Indian Railway Organization for Alternate Fuels (IROAF), Chief Mechanical Engineer, Northern Railway, Divisional Railway Manager of Delhi Division, Director, National Rail Museum, New Delhi, Director in the Ministry of Tourism Government of India, CMD of India Tourism Development Corporation, MD of Madhya Pradesh Tourism and in many other important assignments in Railways.