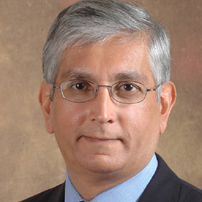 Ashok Jivraj Rabheru CVO DL was born in Morogoro, Tanzania in 1952. He emigrated to the UK at the age of 15 and went on to study for a BSc in Physics at University College London. He continued as an academic for several years and obtained his advanced postgraduate degree in Applied Mathematics, at Royal Holloway and later his Post Graduate Diploma in Computing at London University.
Ashok Rabheru started his career in the IT industry and went on to found the Genisys Group (www.genisys-group.com), in 1985. Since its modest beginnings, as a small five-person company, it has grown considerably and now has offices in three continents and employs over 1,200 staff.
Ashok has been a Trustee of the Duke of Edinburgh’s Award since 2000 and was a prominent member of the steering group for planning and raising funds for the 50th anniversary of the Award in 2006. Although he has retired as a Trustee as of December 2010, he continues to be engaged as the Chairman of the Joint Funding Board in relation to both UK and International aspects of the Duke of Edinburgh’s Award.
Ashok Rabheru has been an active supporter of several charities, including Combat Stress, Debra and medical research institutions such as University College and Imperial College together with ongoing work within the Asian community.
In recognition of his extensive charity work, in particular, his role as a Trustee of the Duke of Edinburgh’s Award he was awarded a CVO (Commander of the Victorian Order) in the 2011 New Year’s Honours List. Ashok has also been honoured with the crown appointment Deputy Lord Lieutenant of the County of Buckinghamshire as someone who has served the local community and has a history of public service in other fields.
Ashok Rabheru is married to Harshida and they are parents to 21-year-old triplets: Rishi, Shayan and Nikita.