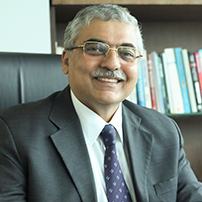 He has built the Dentsu Aegis Network in India from a 50 member team to a 3500 member powerhouse, now the 2nd largest Advertising and Marketing Communications Group in India, overturning for the first time the existing ranking, which has historically been in place for over 80 years.

Prior to this Ashish successfully led and set up several of Lintas India’s (IPG) businesses and also had the global role of Executive Vice President, Lowe Worldwide and Asia Regional Director for Integrated Marketing.

He has served as the Head of Jury for the Asia Pacific Effie Awards 2017 and has served on several global juries including Cannes Lion 2016, Cannes Lion 2007, Dubai Lynx 2008, Festival of Media Global 2013 at Montreux and Asia’s Most Promising Brands and Leaders 2013 in Dubai.

Ashish serves or has served on most industry bodies in India, including as President AAAI, Chairman MRUC, Chairman Goafest 2017 & 2018, Co-Chairman AAAI – IBF committee 2010 – 2018, Board Member-Broadcast Audience Research Council (BARC), Chairman Media Abbys 2012 & 2013 and former Chairman – Readership Studies Council of India. He is also the Founding Chairman of the Sydenham Institute of Management’s Alumni Association, amongst others.